iPhone, iPad and Android Mobile Devices with USB Flash Drives are the Next Computers 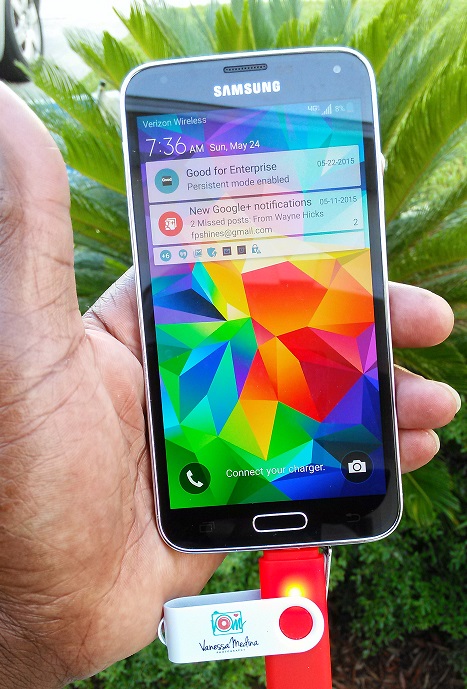 We’ve seen the future of computing:  USB flash drives connected to mobile devices such as your iPhone, iPad or Android Smartphone.  Add to this list any other mobile device such as a tablet or phablet and you now have an OTG, mobile computing platform that lets you do your best work or play — anywhere, anytime.  You can even lower your monthly data costs. 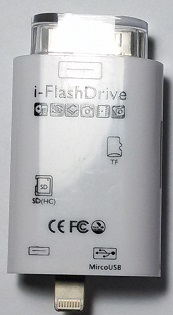 Imagine a 32GB, 64GB or 128GB thumb sized or slim credit card sized flash drive that clips on your keychain or slides neatly into your cell phone case and can plug into all of your computers or mobile devices. 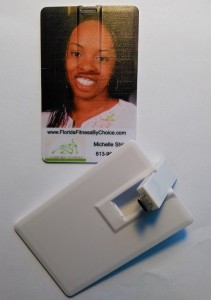 You now have a powerful, low-cost mobile and personalized computer that allows you to:

In late October 2014 at the Tech Summit in California, Andreesen Horowitz partner Benedict Evans presented a talk titled, Mobile is Eating the World in which he posited that mobile will shakeup the tech and Internet industry.  More than 555,000 views of his presentation have been logged on SlideShare. 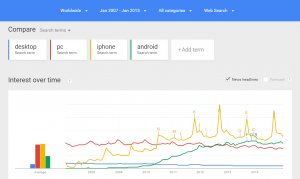 According to Evans, by 2020, 80 percent of all adults in the world will have a smartphone.  This prediction is consistent with the Google Trends interest index, which shows a rapid surge in iPhone and Android online searches.  We believe that we are witnessing a replay of history, taking place in the mobile phone ecosystem similar to what happened in the 1990s with Microsoft Windows on on the desktop.

Fight For the Mobile Platform

The four key players fighting it out this time are Microsoft, Apple, Google and Facebook.  With Microsoft’s acquisition of Nokia, it has a sizable European mobile phone marketshare on its Windows phone platform.   This can be seen when filtering Google Trends search terms, iOS, Android and Windows by the most powerful EU country, Germany. Apple’s closed  iOS ecosystem has about 15 % of the USA marketshare but most of the profit.  Google’s open Android platform has the most marketshare in the USA but much garners much lower profits than Apple.

Facebook has figured out mobile advertising but has no mobile platform to rival Apple or Google.  Additionally, Facebook is the most closed system of all in many respects since its customers remain locked within the walls of the social media giant within the boundaries of its mobile apps like Messenger and WhatsApp. According to International Data Corporation (IDC), Android and iOS accounted for 96.3% of all smartphone shipments with Android at 81%, iOS at 15% and Windows about 3% of the global market.  Given these figures, CustomBulkUSB has focused primarily on USB flash drives that can plug into Google’s and Apple’s mobile platforms:   Android and iOS ( iPhone and iPad), respectively.

In the early days of the the PC industry (1980s) a Commodore 64 or TRS-80 computer used floppy disks to store data.  Today’s mobile phones benefit from cloud based data storage and SD memory cards to store our data.  I am a strong believer in cloud computing storage options.   However, the ubiquitous flash drive still provides me with the most affordable, easy and flexible way to store, move and share information among all my devices and computers.

We believe mobile phones supported by USB flash drives are now becoming the new computers.  I can update my WordPress website, check new leads that come in on email, by phone or into my Customer Relationship Management (CRM) system; I can alo send out electronic invoices or collect payments — all from my iPhone 6 Plus and my Android smartphone.

I carry a 32GB swivel thumb drive on a keychain and a 16GB ultra thin credit card USB flash drive which slides into my iPhone case.  These OTG USB drives are loaded with key data and password protected.  I store large files, photos and videos on these mobile device flash drives, allowing me to be productive in airports, on flights and on trains and subways when I may not be able to get online.

Flash drives have also been able to help those in music industry promote their music.  Take for instance Songhai from New Orleans using our flash drives to promote his music through his record label.  We have attached an example of one of the flash drives we have made for him below: 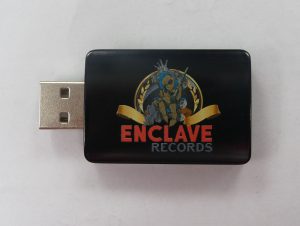 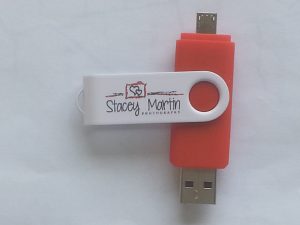 How to Flash Drive – Is Growth in Mobiles Making “Flash Drive” a Verb?

How Much Data Do Flash Drives Hold – Buy Capacity you Need

Custom Selfie USB Flash Drives – For Actors, Actresses and Rest of us