Future of Flash Drives is still secure despite the growth in use of Dropbox, Google Drive and other cloud-based file-sharing and storage options. This is our opinion about the future of flash drives based on history, feedback from the market and hard data from Google Trends. 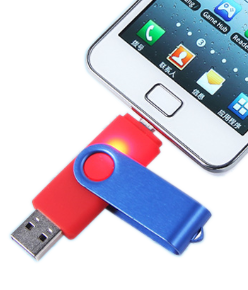 Some would ask, “How can you be so sure?”  The short answer is that there is no certainty of anything but the probability is pretty good and here’s why.

First, history show us that nothing lasts forever and we agree that eventually USB flash drives will be replaced by something else. But Dropbox and Google Drive will not put the future of flash drives into darkness. Second, we have spoken with many people and analyzed posts on social sites, tech boards and online forums.  We’ve seen a theme:  flash drives coupled with cloud file-sharing services such as DropBox, Google Drive, Box.com and SkyDrive complement each other.

There are times when people can’t get online and want flash drives.  For privacy and security reasons people are concerned about NSA, hackers and other nefarious sources getting access to their data, so they prefer hard disks or USB drives.   Finally, we are still humans and we like to touch and feel “stuff”.

Having said all of that, many warning signs are flashing.   There is a long list of things that have fallen out of favor with the American marketplace.  This can be seen quite clearly by analyzing how people search for keyword terms via Google Trends.  This serves as a reminder to us in the flash drive peddling business to keep a close eye on the Dropbox, Google Drive trend and adapt quickly or die.  Here are some examples of those who did not: 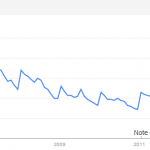 Once upon a time, travel agencies dotted the American  landscape.   You could find one on street corners throughout the USA.  Then came the Internet with Expedia,Travelocity, Google Tickets, Kayak and others.  This Google Trends chart above from 2004 to 2014, shows the fall in the search for “travel agent” in the USA. 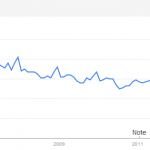 The music industry’s decline worldwide is well-known.  One of the founders of CustomBulkUSB.com is a former musician.  And our company does lots of business with record studios, pop stars, indie musicians and artists who promote themselves and store and distribute their music by custom branded flash drives.  But we digress.

The traditional music industry has been not only slow to embrace Internet technology, but it actually sued its own customers for using online tools that helped them get what they wanted:  low-cost, online music one song at a time vs. a whole album.  In 1999, a new way to provide this service for free was born with Napster, a peer to peer networking platform that allowed people to share their music with others.  At its peak, Napster had over 80 million users.  Rather than working with Napster or others at the time, the music industry resisted change and sued the company for copyright infringement.  They won and Napster was shut down (later sold of in succession to Roxio, Best Buy and Rhapsody.

The Google Trends chart  depicts how Americans are searching less for the term “music” online.    We do not believe that people are listening to less music, instead they use other search terms and apps that get them access to music.  Music is now listened to on apps and sites like, iTunes, Amazon, Google, Spotify, Pandora, YouTube, SiriusXM.com, Rdo and Songza.

In April 2013, Money Magazine did a special report called, A Decade of iTunes Singles Killed the Music Industry.  According to the article, since the 2003 introduction of iTunes, music sales have fallen from $11.8 billion to $7.1 billion in 2012 — with iTunes now pulling in 63% of the 1.4 billion digital singles sold in 2012.  In 2000, Americans purchased 943 million CD albums, and the number of music singles bought hardly registered on the charts.  According to Money, by 2007 CD album purchases had fallen to 500 million and Americans had bought over 800 million singles.   (Source:  http://money.cnn.com/2013/04/25/technology/itunes-music-decline/) 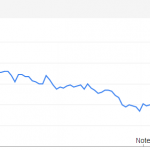 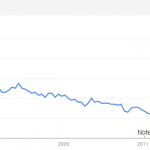 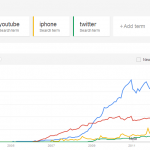 Why Would USB Flash Drives Be Any Different From Music, Travel Agents, Newspapers and Television?

We believe that as long as the flash drive industry remains open to change, anticipates client future needs and provides relevant products and services that are of value to customers, it can avoid becoming “roadkill on the information superhighway,” like newspapers, music, telephone land lines and travel agents.   We can see some examples of how the industry is doing this by again looking at how millions of Americans search online: 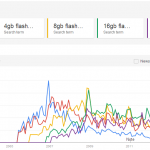 We will continue to listen to our clients and keep our eye on future trends that will help us to provide more value to our customers.  What lies ahead?   For us, the future of flash drives ties into some of the biggest tech trends we have ever seen: Quantitative Self, Wearable Computing or Wearables, Big Data Analytics and  the Internet of Things (IoT).  These are topics for future posts so stay tuned.

Tell us what you are seeing.  What do YOU think about the Future of Flash Drives?